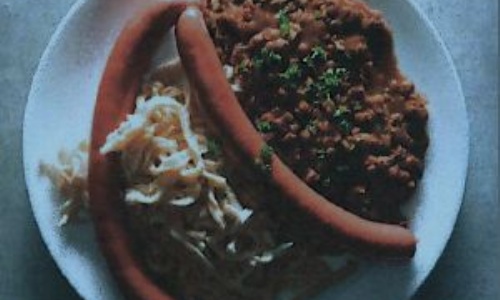 Lentil Stew with noodles and Frankfurters

As the national dish of the Swabian region in southern Germany, it is traditionally served with homemade Spätzle which are drop noodles made with eggs and flour. If you can't find them in your local grocery store, you can use other noodles instead.

- Wash the lentils under cold water in a sieve, then pick them over and remove any debris
- Place the lentils in a post and cover with water. Add the two bay leaves and simmer until the lentils are soft, but not until they fall apart
- Brown the bacon pieces with some butter in a hot pan. Add the onion, carrot and leek and cook, until onion is translucent. Add the flour and cook, stirring until it takes on a golden brown colour.
- Pour the broth over the flour stirring occasionally to make a roux.
- Drain the lentils and add them to the bacon and vegetables. Add the vinegar and season to taste with salt and pepper.
- Mix everything well and heat for a few minutes before serving.
- Serve with a nice portion of lentils on the same plate with fresh Spätzle and frankfurters, hot dogs or saiten which have been thoroughly heated in simmering water.

- You can cook the lentils with smoked meat and serve the meat with the meal (instead of the sausage).
- Vegetarians can leave out the bacon and just use butter to cook the onion, carrot and leek. The meal can also be served with vegetarian sausages.